As the world embraces the 5G rollout, companies in many different industry sectors are seeing this new technology as a game changer that has the capacity to transform the digital experience. Promising to be up to 30 times faster than current network infrastructures and with the potential to deliver virtually instant two-way data transfer, 5G will undoubtedly unlock assets, resources and services in ways that we have only just begun to imagine.

For the broadcast and streaming industry, 5G is already making a significant difference as vendors develop products that use this technology in ever more innovative ways. Whether it is enabling easier access to cloud-based production workflows, allowing remote and live productions to become more reliable and cost effective – especially in places where public WiFi is either unavailable or unreliable – or enhancing the user experience for audiences at home and at live events, 5G is undoubtedly having an impact that cannot be ignored. 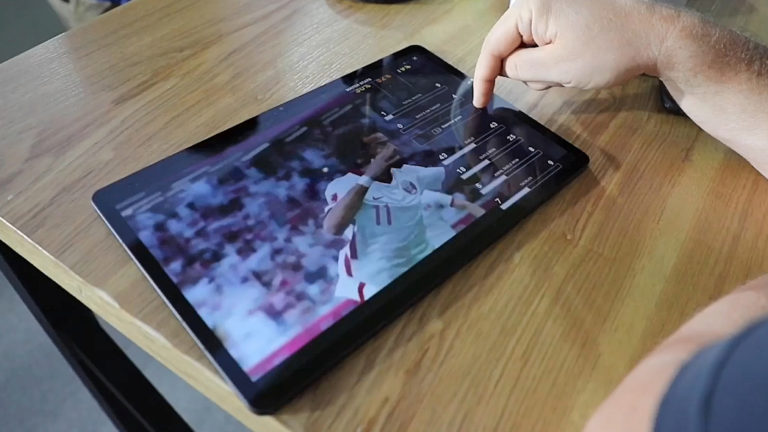 As part of its highly acclaimed media innovation Accelerator programme, IBC recently lent its support to a multi-company, project-based initiative that examined the onset, rollout and continuing evolution of 5G for remote production and live sports.

Austrian solutions provider NativeWaves was one of nine vendors, developers and solutions providers who took part in this project, working with eight ‘Champions’ – broadcasters, content owners and studios who buy technology at IBC – to put 5G under the microscope. The aim was to see if it lived up to its promise to untether and enrich broadcast production and creativity and bring a host of new immersive experiences to viewers of live sports events.

As an emerging streaming technology company, NativeWaves was delighted to be involved in this initiative. The company is already playing a key part in the development and adoption of technology that delivers a personalized viewing experience across multiple screens. The high precision, low latency and synchronization solution offered by NativeWaves provides instant access to alternate camera angles, graphics, audio and data feeds so that audiences can choose what they want to see without any lagging sequences or interruptions.

Christof Haslauer, CEO of NativeWaves, says: “We had planned to unveil our new NativeWaves EXP platform at IBC 2021, but when the show was cancelled, we were delighted to showcase our technology via this IBC Accelerator project.”

The events chosen to test 5G workflows and technology were two concurrent soccer matches in Qatar in December 2021. These were an Arab Cup match that took place in a major stadium and a youth match that took place at a venue nearby. The Arab Cup is an established football tournament, but the fact that it was taking place in Qatar made it a perfect testing ground for new technology that might be used at sporting events such as the FIFA World Cup, which is also taking place in Qatar later this year.

Over 60 people in 12 different countries were involved in the IBC project, which aimed to show how 5G could be used to create a unique fan experience in a stadium and at home.

“We were investigating 5G’s ability to transfer captured content into the cloud in an extremely fast and efficient way, and to allow many fans in a stadium to concurrently stream high-end content,” Haslauer says. “For rights holders, it was an excellent opportunity to explore a more direct and personalised relationship with their fans by giving them greater access to content that was already being generated.”

The project participants used a range of innovative cameras to capture as much content as possible from both soccer matches. These included AI automated cameras, drone cameras, normal TV cameras (operated by Qatar-based BEIN Sports) and handheld iPhone cameras, which were used to gather footage from the fans’ perspective in the stadium. All content generated by the cameras was fed to the cloud via 5G. From here, production staff using Grass Valley and Evertz equipment created a professionally produced TV experience.

“User Generated Content captured via iPhones allows fans to experience the game from different seats in a stadium and to see what is happening in other fan zones,” Haslauer says. “Combining raw User Generated Content alongside professionally made broadcast footage is very powerful and exciting because it brings an entirely new dimension to the live sport experience. Obviously, if you want broadcast grade latency and synchronisation, you can’t have everyone trying to upload content all at once, so for this experiment Al Jazeera had various people located in different seats who were sending footage to the cloud via 5G. I believe, in future, we will see streaming providers and stadia having their own apps and inviting selected people onto the platform to upload content from the audience perspective. This will need to be managed to maintain quality and editorial control.” 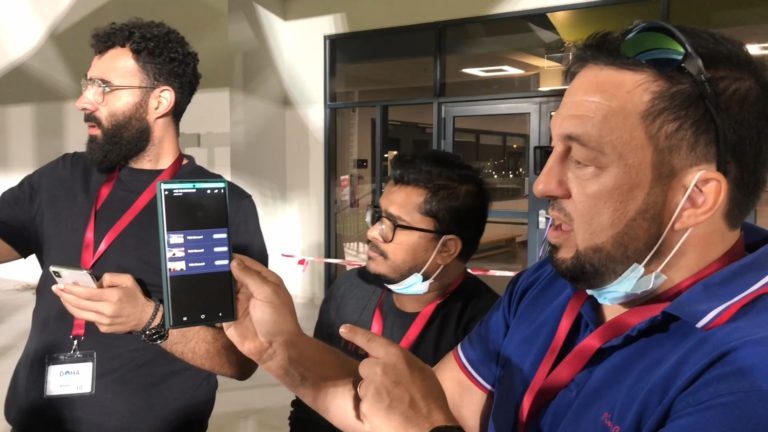 What NativeWaves Brought To The Project

NativeWaves’ role was to take charge of the fan experience. To this end the company created an IBC branded app using its NativeWaves EXP platform, which aims to make it very simple for broadcaster and streaming providers to offer an enhanced OTT experience. Using the app, fans could select the match they wanted to watch and switch through various camera views so that they could see the action from different perspectives. They also had the ability to interactively choose data and graphics overlays (line-ups, player stats, match stats, predictive data, etc.), and watch replays and key moments from different camera angles.

“We were the aggregators because we were taking content from as many different sources as possible and bringing it all together,” Haslauer says. “It’s not just about camera content; we were also integrating match data from Stats Perform and user polls generated by graphics company Singular Live to create a compelling and unique user experience.”

Finding the right balance between low latency and genuine synchronisation was one of the key challenges identified by this IBC Accelerator project. In a multi-vendor environment, different encoder and decoder technology must work together seamlessly to ensure that these issues are overcome.

“If you are in the stadium, the perfect user experience is to be able to watch camera angles from different parts of the stadium with super low latency of less than a second so that it appears almost live,” Haslauer says. “This project showed that it is possible to do this, which is very exciting. It also showed broadcaster and streaming providers the huge potential of engaging and interacting with fans by providing replays and additional stats and data. In those situations, latency is not an issue because the experience in not live.”

Haslauer adds that, from NativeWaves perspective, the project was a huge success because it allowed the company to showcase its new NativeWaves EXP platform to established industry players and build long-lasting future partnerships and friendships.

“With NativeWaves EXP, we have a platform that delivers the low latency and synchronisation needed to do everything broadcasters or venue owners want,” he says. “Our aim is to take all the aggregated content we receive and build an interactive user experience that really enhances viewer engagement and enjoyment, whether they are in the stadium, on the move or sitting at home watching a live event on TV. Broadcaster and streaming providers can easily build our technology into their own apps, and we have various options available depending on what they want to achieve. Being able to participate in a project like this was so valuable and we are very grateful that we were invited to take part. It’s been a fantastic learning opportunity and it’s very exciting to see the potential for 5G across all live and sporting events.” 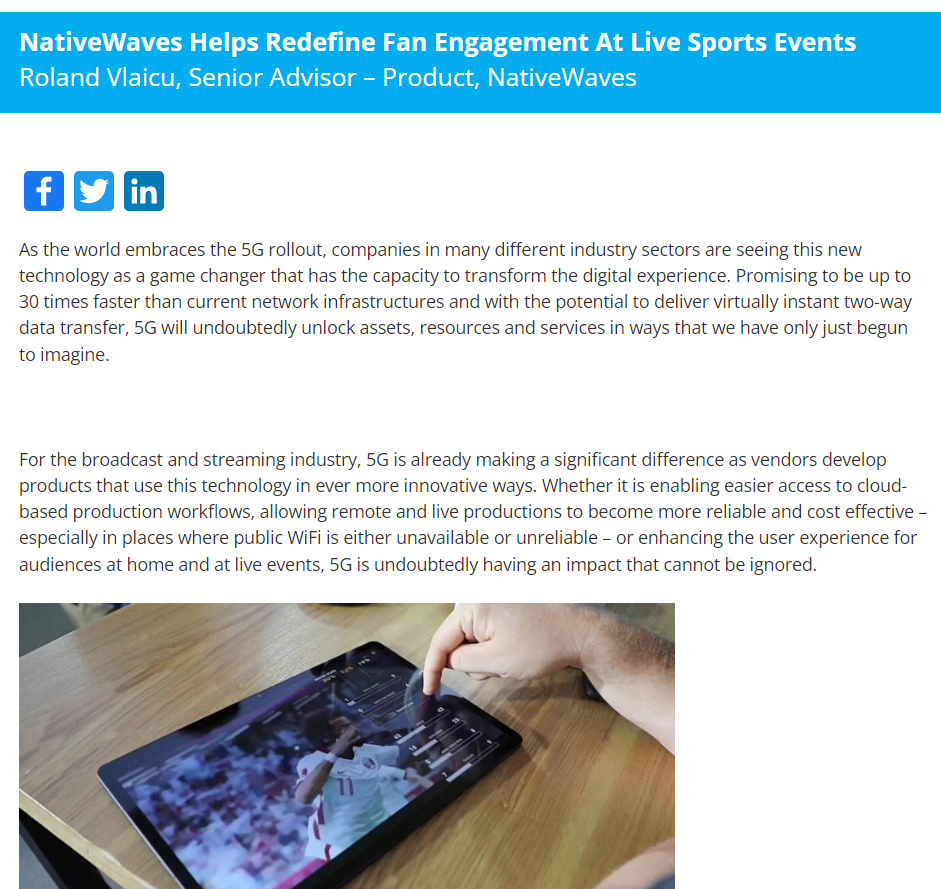 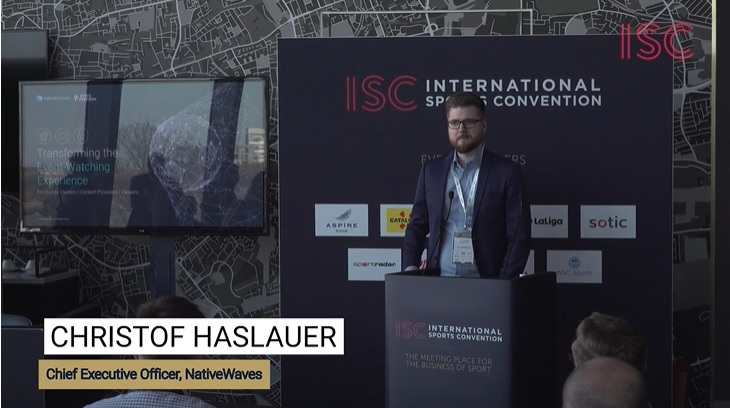 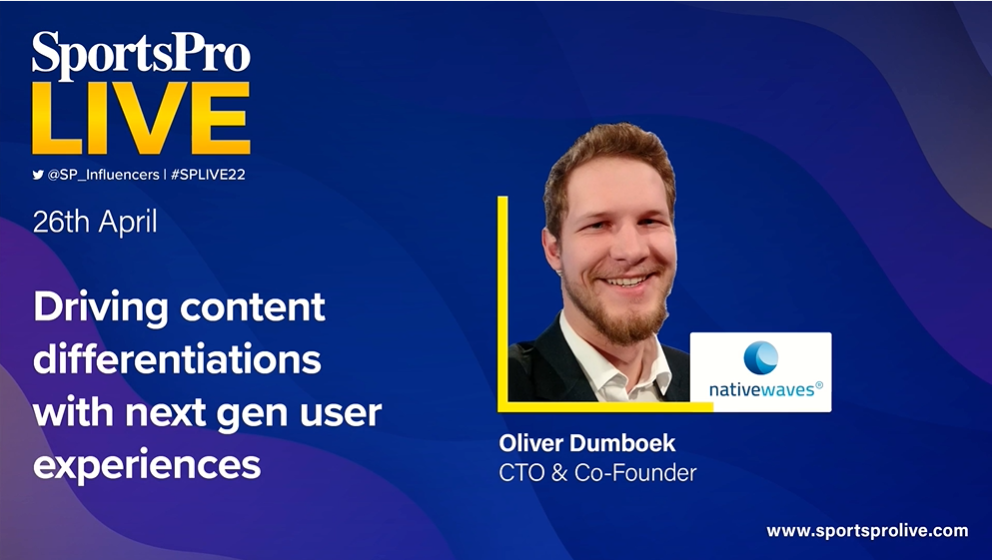 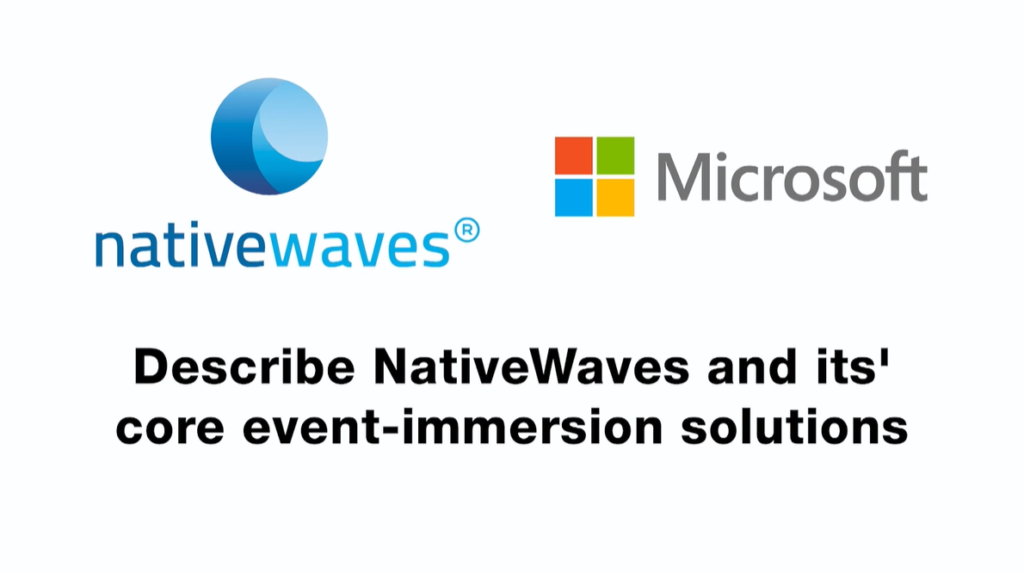 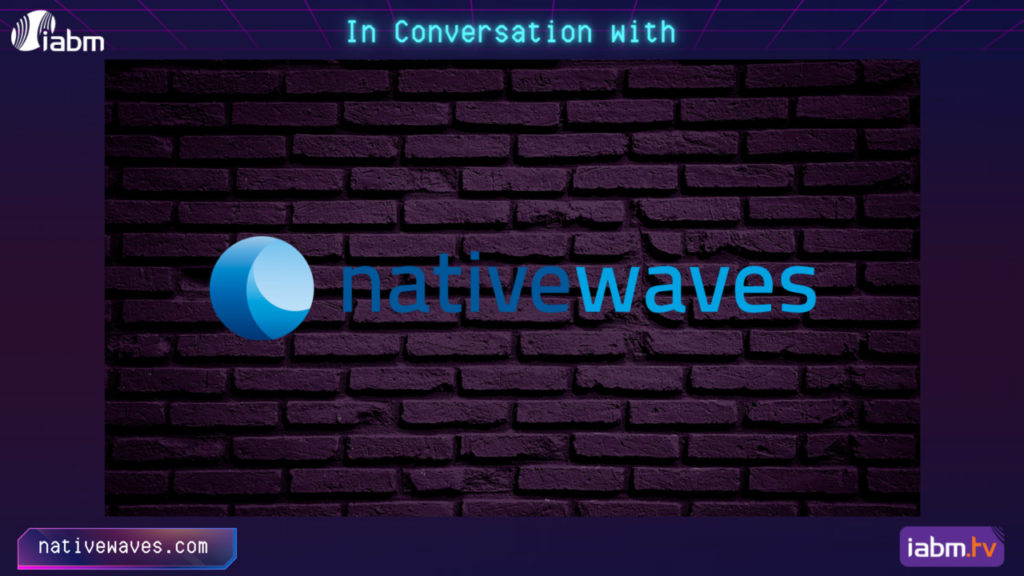 IABM TV in conversation with NativeWaves 2022

IABM TV in conversation with NativeWaves 2022 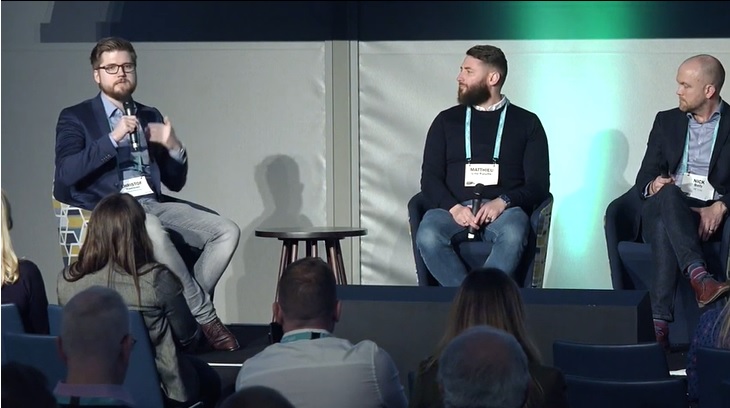 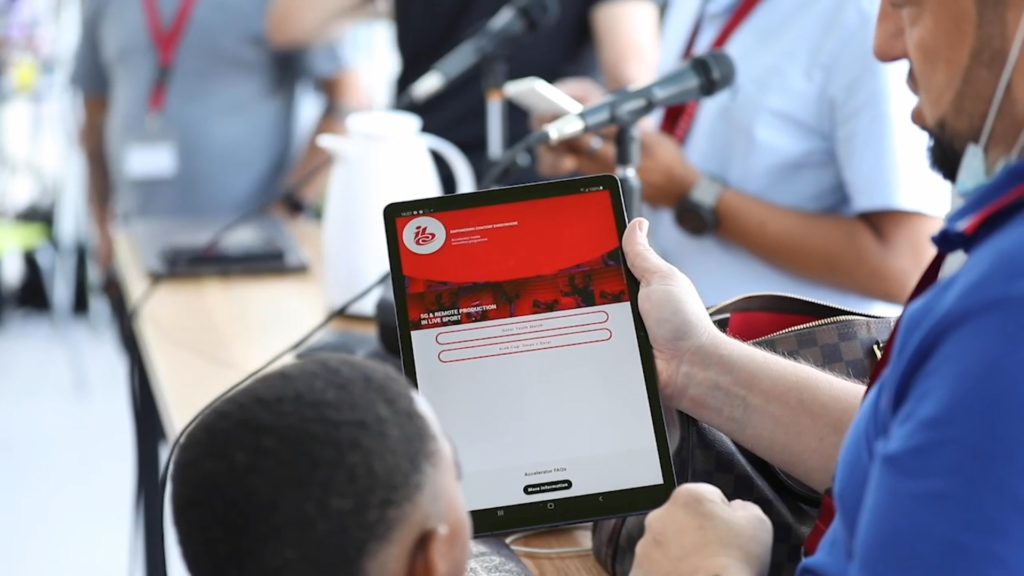